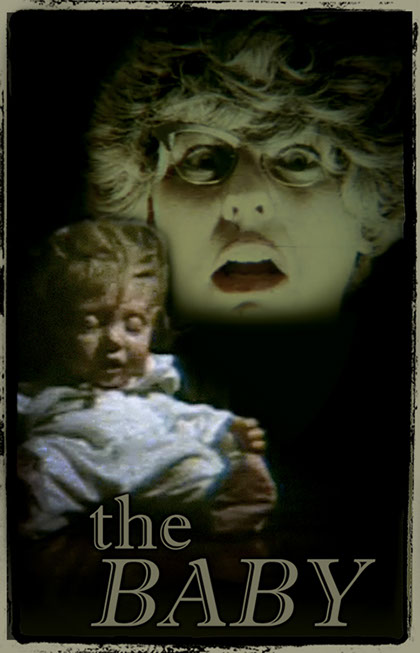 Once my world calmed down after my mother’s death, I still had the desire to make more films, and I came up with the idea for THE BABY based on a few things… Chris Bouchard and I found a Kleenex box cover that reminded us of Paullette, so we made that a major plot point (putting it on a rag doll body and calling her Pauline) because we thought it would be hilarious. I also found a too realistic baby doll at Toys R Us that just had to be used for something. And I thought it would be really funny to see someone whisked right out of their high heeled shoes. So there was my plot.

A baby is left on a stranger’s doorstep by a unwed mother (Uncle Alice); the baby is taken in by a kindly woman, only to have her husband arrive and find an empty house except for the mysterious infant. When her children get home from school, they only find the baby. The teen girl Debbie (but you call her Starfire) calls her friend Andrea, who rushes over with her new wave boyfriend, only to find the house empty. Andrea and her boyfriend wind up getting sexy before finding out the true horrifying secret of the baby.

Meanwhile, the old busybody next door, who just knows trouble is brewing, heads over and winds up another victim.

This quick, fun, silly short film was shot over the course of a couple of days, and reunited Uncle Alice, Gina Cappuccino and Chris Bouchard. Just as importantly, it introduced a couple of people who ended up as regulars for the ensuing decades, Carrie D’Waay and Barri Evans. Of course, I was the bleach blonde new wave boyfriend, and had a semi nude scene again (what was I thinking?!). The husband was played by my coworker Michael Gertz, and the teen boy was played by Chris Kroell, whose older brother Mike ended up acting in my next film and doing the music for a future project.

This film ended up being a companion piece to the longer movie PROBLEM CHILD we did the following year.

Click on thumbnails below to start slideshow of images from the short film!

Barri Evans in her film debut as the kindly Mrs. Jones who takes in the baby left on her doorstep

Michael Gertz as Mr. Jones who comes home to find something concerning

Chris Kroell as Tommy , who is charged with looking after the infant

Skinny, blonde me... as another androgynous boyfriend

Weird... nobody is home but this random baby

Innocent sleeping baby... or is it?

Yes, we propped the doll up on a tiny ledge and drew open eyes on him

Sleeping baby has had a long day