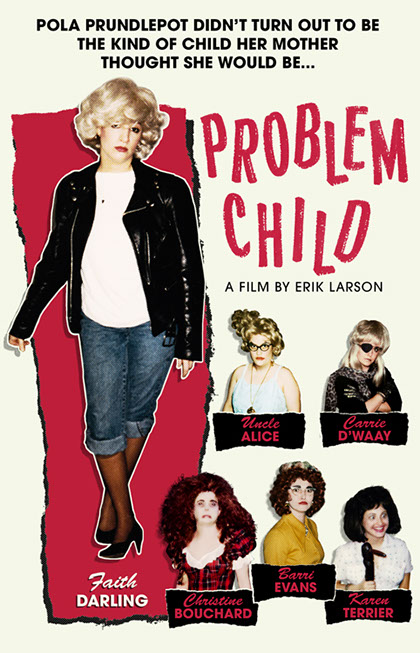 This film was pivotal in my evolution as a filmmaker. I was getting better about lighting, I would shoot extra footage so I didn’t lose dialogue in editing, the sound was slightly more coherent, and I had a semi complete script before we started shooting.

Gina Cappuccino was cast as Pola Prundlepot, a wild teen with the keys to her mother’s beloved “family car” (there is even a weird, musicales song about it in the movie). Uncle Alice would be her mother, Carrie D’Waay would be the villain, Mike Kroell was the hitchhiker who serves as the catalyst for the adventure that follows. Barri Evans, who had played the kindly mom in THE BABY, said she was hoping for a kookier role. Well, careful what you wish for… we made her into Gert Henderson, cranky neighborhood know it all, with giant Groucho eyebrows, smeared red lipstick and the most unattractive curly copper color wig you have ever seen. She had a friend in her department (who I knew a little) named Faith, who I was planning to give a small role as Gert’s daughter.

As fate would have it, Gina Cappuccino showed up zero days of shooting and it became obvious she couldn’t commit to the lead role in my latest opus, Asleep at the Wheel. So I did something I had never done before… I replaced her. I asked Faith if she would be interested in the lead… she was… and the rest was history. Faith Darling has been one of my stars and best friends ever since.

Now, I must say that Carrie D’Waay is about the sweetest person on the planet. I don’t know whatever possessed me to cast her as the villain in the movie, but she ate it up with relish and for better or worse has found herself typecast in nearly all my films as the bitch. I think it is just because she does it so well. In this, she plays the eyepatch wearing Margot, with giant white hair and miniskirt. Fabulous.

We shot on weekends for a few months, changing and tweaking along the way. I gave Gina Cappuccino a smaller role that she could shoot in an hour; Chris Bouchard outdoes herself in one of her most bizarre characters as a girl who has been locked in the attic by her mother but happens to escape as Pola comes to their house. I put myself in the movie as a hapless kidnapper (why… why?! AND sang the theme song. WHYYYYY??!) A new coworker of mine, Craig, who I thought was just so handsome, was dropped into the movie on the last day of shooting as Pola’s eventual love interest at the end of the film. He ended up being in many films with us over the years as well. And Karen Terrier (not her real name) was an executive at the company I worked at, and made her debut as the crazy kid-locking mama, chewing every bit of scenery along the way in the best way.

The other ongoing relationship to come out of the movie was when Uncle Alice introduced me to this gal she had been in a garage band with some years earlier. I didn’t want to keep using other people’s music, and Jill was suggested as someone who might be able to provide some original music for the movie. She recorded Uncle’s song with some echo effects added, and I went to her house and she did some riffs on her casio keyboard that she recorded for me. I went home with a cassette tape, and put it all together with the edited film and never went back to music from dubious sources.

While I was finishing up the editing, the band Asleep at the Wheel started touring through Chicago, and it seemed like maybe I should change the title of the movie to avoid confusion in the press. Not that we got any press, but it never hurts to be prepared. We held the premiere at The Roxy in June of 1988, with THE BABY as an added featurette. It was great, a packed house. We had dinner with the cast and crew (ok, almost all of the crew were me). I laugh now because nobody knew who Jill was and kept asking me. As it turns out, Jilly Idle became one of my most frequent collaborators and dearest of friends. She wound up an integral member of our little film family, beloved by everyone.

Carrie D’Waay as the menacing Margot

Christine Bouchard as Stephanie, proving she will go to any lengths for a role!

The fabulous Barri Evans as Gert, the neighborhood busybody

Karen Terrier as Mrs. McLeod, the crazy lady who takes Pola in

Craig Goding as the Man who takes Pola away

When a mom is worried... she throws some Ritz crackers on a baking sheet!

Pola (Faith Darling) and the Hitchhiker (Mike Kroell), who sets things in motion

Uncle Alice showing off some gams

I have no caption for this

Dinner at the McLeod house. Christine Bouchard and Karen Terrier

Uncle Alice not only got hog tied for real, but hopped down the steps this way... IN HEELS!

Uncle Alice going over the script behind the scenes

One of my all-time favorite photos of Faith Darling, as she touched up her makeup in my infamous wig room

Uncle Alice goofing around on set... with some "fresh baked" cookies that look suspiciously like Ritz crackers

Faith Darling in costume as Pola, patiently waiting for the night shoot to happen

Director Erik Larson (me) filming a scene in the rain

June 4, 1988: The premiere at The Roxy on Fullerton in Chicago. Introducing Uncle Alice on stage while Christine Bouchard and Faith Darling look on

June 4, 1988: The premiere at The Roxy on Fullerton in Chicago. L-R: Karen Terrier,  Christine Bouchard, Faith Darling and director Erik Larson (me)

June 4, 1988: The premiere at The Roxy on Fullerton in Chicago. Introducing  Christine Bouchard onstage with Carrie D’Waay looking on

RoseMary Hall and I at the screening

Chatting with Daphne Walsh after the screening. Christine Bouchard and Holly Tempka are seated at the table

Autographing a poster for an audience member

A friend presented me with a tiny Oscar at one of the subsequent screenings...

December 1988... we shot some Christmas cards with Pola and Shirl... and the Family Car