As the one year anniversary of our first showing of GRAHAM CRACKERS approached, I booked another showing of the film at The Roxy, but I wanted to do something to commemorate that we had been showing our little super-8 movie on and off for a year. I was in TJ Maxx with my sister, and they had set up their Christmas merchandise early, including a shelf of nutcrackers. When she remarked that one was particularly evil looking, being her little brother, I promptly picked it up and started chasing her around the store with it exclaiming “Worthless!” in a gruff voice. As we collapsed in teary laughter, I had the idea I was looking for. A Christmas short about an evil nutcracker.

Linda had dressed up as Lucy Ricardo for a party I threw with a TV theme, and after applying her makeup exclaimed “I don’t look like Lucy… I look like fucking Joan Crawford!” And she did bear a strong resemblance. So naturally I felt compelled to make a movie where she played a Joan-like character. NUT CRACKER seemed like the perfect film for just such a character.

Linda played a woman, clad in furs, spending Christmas alone, with only a package from her children to provide holiday cheer. Drinking and bitter, she opens the box to find a nutcracker, which leaves her unimpressed and she unceremoniously tosses him into the trash. As strange noises and occurrences start, she begins to suspect perhaps the little wooden guy is alive. And trying to kill her.

Obviously heavily influenced by 60s/70s “toys come to life” tales, NUT CRACKER ended up being a film that most of our crowd really reacted well to. It was short, campy and had some dark humor and a couple of unexpected moments. Despite what should have been an extremely quick and simple shoot, there were some unexpected moments for me as well… when our original location fell through at the last moment, we ended up shifting the action to my house. When the one other human besides Linda who was supposed to make an appearance in the film blew us off completely, Jilly Idle stepped in at the last second.

took 2-3 weeks), or experiment with dubbing all of Linda’s dialogue. I chose the latter.

Jilly and I set up the project in her house, would have Linda watch a sequence and then would run the part again with Linda recording her dialogue into a microphone hooked directly into the projector, wiping out the original track recorded onto the film. A dicey option, but it kinda worked. In retrospect, I think the slightly mismatched sound gives an eerie feel to the movie. And the audiences loved it.

It was a short I would always show with other movies, always a favorite at our screenings.

I always wanted to do a sequel to it. 25 years later, I finally got to do exactly that. 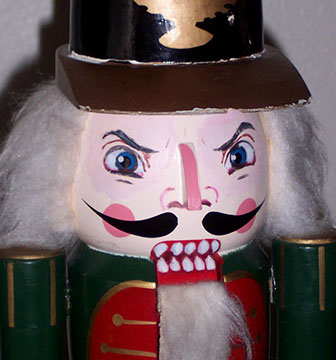 We also lost the (disposable) camera that had photos from the film shoot on it...

but here is a closeup look at the Nut Cracker that Linda painted to look even more evil than he already did.

Fun fact... I still put him out every year at Christmastime.