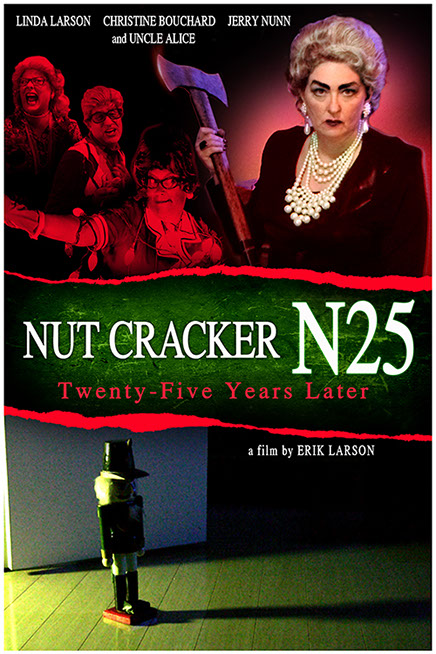 “It was Christmastime, exactly twenty-five years ago...”

And so it was. In December of 1990, we were prepping to do a screening at the Roxy in Chicago of our film GRAHAM CRACKERS on its one-year anniversary. And we decided we would do a little something special to accompany it. And we premiered our short NUT CRACKER, arguably our most-viewed and best-loved project to date.

When we realized that the twenty-fifth anniversary of that holiday “classic” was fast approaching, I gathered the troops to do something special once again -- our very first sequel.

We pick up the story a quarter of a century after the first, with the unnamed woman just as unpleasant as she was. She has been in hiding for the past two and a half decades, with only her maid Cora to keep her company. But she is still haunted by the memories of that fateful Christmas and the little wooden man who terrorized her (almost to death).

Then one day, a suspicious package arrives in the mail from her wicked children and events are set into play, promising it will turn out to be a scary little Christmas... a horror twenty-five years in the making!

Debuted online in December of 2015 and had it's big screen debut at Martyr's in Chicago in November 2016.

The script... a quarter of a century in the making

Linda Larson puts some finishing touches on one of her costars

Linda Larson as The Woman is ready for battle