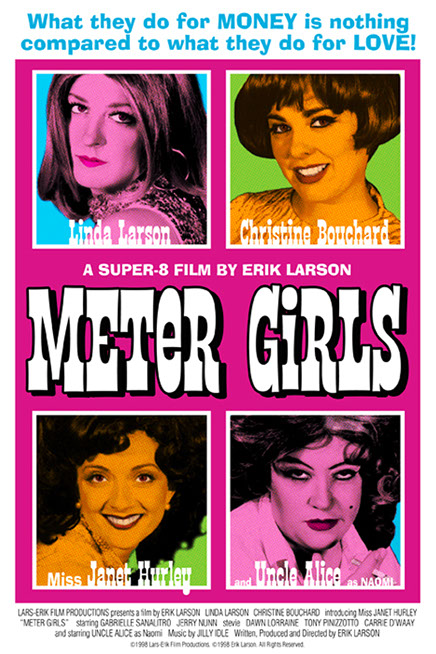 ”You can’t make a feature-length musical on Super-8 film!” exclaimed one of our opening night guests in 1998. But that is exactly what we had done. This is the feel-good mod hooker musical of the year, inspired by the “three girls” films of the 50s and 60s.

Young and innocent Lorraine Willis leaves her smalltown home and runs away to the big city in search of fame and fortune -- and Mr. Right. What she finds along the way are two call girls, Myrna Beavers and Trish Vanderplop, who end up being her best friends and roommates. They show her the tricks of the trade and together they take on all the fellas in the big city. Lorraine transforms herself from country mouse to glamorous city girl, all while  trying to steer clear of the wrath of their wicked pimp Mrs. Schnitzel, to become the most profitable “meter girl” in town.

I love the midcentury “three girls” movies, what with their groovy clothes and mod apartments, and decided this would be my foray into that world. I teamed up with Jilly Idle, Uncle Alice and Tony Pinizzotto to write a bunch of original songs (with titles like “You Gave Me the Clap”) that the cast would perform. We started shooting in July of 1997 in sweltering heat, and wrapped by shooting pickups for the same scene in November as a light snow was falling on the girls in their sleeveless polyester finery. This was our most ambitious project to date, and it received a lot of love from our audiences.

We played a string of sold-out shows at Beat Kitchen in Chicago, returning for several short runs. We received a bunch of press (including a blurb from Roger Ebert, which literally made my day -- I still keep a printout of it above my desk), and even wound up being profiled on PBS’ “Wild Chicago.” Every once in a while, if you’re lucky, you might find a VHS of this floating around.

The Willis family in happier times back in Pleasant Prairie - Edna, Ernie, Lorraine and Ed

Shooting a scene outside Union Station in downtown Chicago

Barri Evans as the waitress

Behind the scenes... a set visit from Faith Darling

Myrna ready for a scene

Myrna says a little prayer before heading out

Dawn Lorraine as Midge... the clumsiest call girl around

Trish Vanderplop... ready for a night on the town

The reason we call them Meter Girls

Mrs. Schnitzel checking up on her investments

Naomi in her normal state.

Lorraine learns the tricks of the trade

Naomi’s version of a welcome mat

Gig (Jerry Nunn) has a run-in with Naomi (Uncle Alice)

A chance encounter leads to love for Bobby and Lorraine

Trish has a murderous encounter

The girls at their party - Lorraine, Myrna and Trish

We ain’t did the cake yet!

Rehearsing for “The Clap Song”

You gave me the clap!

Trish and Gig are crazy about each other

The most epic wedding this asylum has ever seen

The girls... happy at last