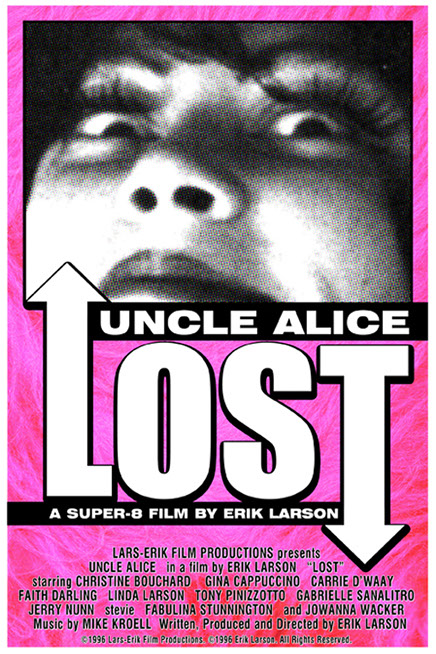 “Why did you stop?” Asked a friend of Uncle Alice after seeing some of our older films. The question caught me off guard. I never intended to stop, I just had. It had been several years since I had gathered the group together for a film project. True, I had done a project for a film class with a couple of my stars, but nothing like what we used to do. Those projects were definitely in the rear view mirror.

So I started writing. And I met some people in the process who inspired me, and the words just flowed out. I made the calls, and got most of the old gang together for one more project. Tony helped me by putting together a shooting schedule (a first for us!), and we shot most weekends until we had the whole story finished.

I was even lucky enough to get Faith Darling to appear. She had moved out of the country since we did KAFIEND, but she happened to be coming to Chicago for a weekend, so I nabbed her for an afternoon, crammed her in an uncomfortable polyester dress, and we shot her scenes. The whole thing seemed fairly effortless. It just flowed.

LOST is the story of one day in the life of Mitzi. She is a woman who sees only the good, does not recognize the bad going on around her. In fact... you might call her oblivious. Uncle Alice’s portrayal of Mitzi is at once hilarious and maddening. She never stops moving, repeats everything the other characters say (especially in the scene with Faith), and goes about her misadventures blissfully unaware.

I asked Carrie D’Waay to play her daughter Sheila... a grotesque variation of a scheming user for her collection of villains. She was out of the box with her performance, and hilarious. Gina Cappuccino returned as the dream version of Mitzi. I teamed Christine Bouchard with Jerry Nunn for the first of several pairings. My sister Linda joined the fray in an aging Joan Crawford-ish character. She nailed it. And we had many newcomers who shined in their roles, including the debut of my love Tony, a new scene stealer named Gabby Sanalitro, and a handful of friends with untapped talents -- Julie Ballenger, Jowanna Wacker, Fabulina Stunnington and stevie. It was so much fun to do, so great to be back doing what we loved.

One person who didn't come on board was Jilly Idle; we had lost touch and I didn't know where to find her. My friend Mike Kroell (who had played the doomed hitchhiker in PROBLEM CHILD) offered to create our soundtrack, and brought a cool  different vibe with his music.

We were booked for a premiere screening at Beat Kitchen in Chicago on December 1, 1996. It was a nervous time for all. First we showed NUT CRACKER to get the crowd warmed up, then my film class project KAFIEND. Then the new movie. It went over very well. We oversold each of the two shows that night by about 40%. People were sitting on the floor as the room was packed beyond capacity. It was a hit, it was such a blast. And inspired us to move directly into production on another project. Our most ambitious undertaking to date. A feature-length Super-8 musical called METER GIRLS.

Gina Cappuccino is the dream version of Mitzi

Gina Cappuccino and Jim Goranitis in the dream sequence

A very strange photo of Mitzi from LOST

Mitzi cleans up. Yes, Uncle Alice hated me for this scene.

Sheila (Carrie D’Waay) and her prom date (me)

Sheila has changed quite a bit

Sheila and one of her many children (Marta Jane Murray)

The “plumber” (Bill Saveley) has some business for Sheila

Me shooting a sequence with Uncle Alice from LOST

Jowanna Wacker as Ethel. A wool maternity suit in 100 degree heat is delightful.

Finding Ethel in the kitchen

Another angle of behind-the-scenes shooting

Mitzi meets up with Shelley (stevie) for a lunch date

On the set of LOST with Uncle Alice, Julie Ballenger and stevie

Linda Larson as Ms. Crisp goes over the script before filming her scenes

In the costume shop with Dee Dee and Ms. Crisp

Gabby Sanalitro and the kids who terrorize Dee Dee

Dee Dee and Ms. Crisp encounter Smudge in the basement of the costume shop

The Larson siblings, Erik and Linda

Behind-the-scenes with Amy Rhome, Tony Pinizzotto and Mary Karlson (with Uncle Alice taking a smoke break in the background)