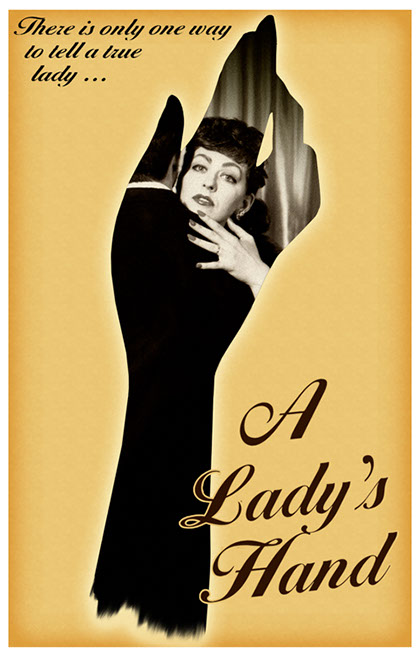 The plan was to have Linda star in another film where she played a Joan Crawford-ish heroine in an overwrought melodrama about a woman who hides the terrible secret of the accident which has left her noticeably scarred from the world. I really liked this one; we did a photo shoot of Linda in an impeccably styled wig and vintage clothing, and I have to say I thought she was stunning. She gave such strong Joan vibes that when she came upstairs my dad saw her and just remarked “I never cared for Joan Crawford.”

For once, I had a finished script, and gathered a group of friends as the crew. It was going to be fun. I scheduled a production meeting to read through the script with everyone… I was very happy with it. Then one of my friends asked what had happened with the previous project, the music video for Kari called “Oh, Ryan (What’s Going On),” that I had ended up scrapping after shooting it. Many of the same people had put time and resources into that, but it became financially unfeasible for me to finish as the people who had asked me to do it in the first place and donate it to a larger project started adding up how much they were going to charge me for using their editing facilities.

So… at the meeting, when confronted, I did what any reasonable twenty-something drama queen filmmaker would do. I threw everyone out of my house and dropped the movie entirely. Probably not my proudest moment or my best decision. I honestly was just hurt that my friends would confront me in front of everyone instead of simply asking me one on one what had happened. I did feel a little betrayed, but more importantly I really felt like getting a project off to start like that would not be good. It destroyed any confidence the group would have had in me, and left me with my own confidence shook up. Maybe it was just all over.

It would be a while before I attempted another project. I honestly didn’t think at that point that I would ever pick up another movie camera.

Click on thumbnails below to start slideshow of images from the photo shoot!

Great photo of Linda in character

The poster shot. My pal Jesse Martinez stood in for the man

Alternate version of the poster shot

Another version of the poster photo

The picture of glamour

How fun and dreamy is Linda here?!

Linda in a stunning vintage 1940s dress. It gives me a perfect impression of what could have been

I love this shot of Linda in the fabled wig room... Cleaning the mirror was SUCH a Joan thing to do

Another shot of Linda in the wig room

Nan Owens behind the scenes