Jilly Idle is a self-taught Chicago musician/singer/songwriter well known on the coffeehouse and club scene.

I first met Jilly in 1988, as we were in production on PROBLEM CHILD. She was a friend of Uncle Alice, having sorta been in a band with her a few years before. I wanted to have Uncle Alice’s character lip-sync a song, “The Family Car,” in the movie, and Jilly had a 4-track recorder so she got the gig.

She recorded Uncle’s vocals acapella, my voice singing the title theme (accompanied only by my snapping fingers) and she did a handful of sounds and loops which would serve as incidental music. She dubbed them all onto a cassette for me, along with a song they had recorded together which seemed like a perfect fit for the movie. It was called “Backseat Driver.”

I invited her to the Roxy, where we were testing the projection and sound prior to premiering the movie, to see her work in context of the film. I think she liked what she saw, and we talked about her being more involved from the start next time we did a project. I still remember Jilly at the dinner I hosted at the Roxy for the cast and crew right before the premiere. Nobody knew who she was. That would change very shortly.

PROBLEM CHILD went over well with the audience and before you knew it, we were meeting up talking about the next film. I had the ambition to do a feature-length musical with all original songs. Jilly signed on right away, writing and performing all of the music and writing or co-writing most of the original songs for GRAHAM CRACKERS. She and I did the opening duet song late one night, laughing the entire time. It’s still one of my favorites. If you look closely at the film, you might just spot Jilly in a cameo!

The following year, we were preparing to do an encore showing of GRAHAM CRACKERS at the Roxy, and I wanted to do a holiday short to accompany the feature. NUT CRACKER was supposed to be simple, a 10-minute short with pretty much only my sister Linda (Jilly once again cameos, filling in for someone who blew us off at the last minute). Jilly would do some interpretations of holiday songs, and boom, done. However... the film came back from the lab with the sound completely ruined, and we had no time to reshoot. So we set up an ADR session in her studio, and Linda redubbed all of the dialogue. I think it is what gives that short it’s almost otherworldly quality. Jilly’s holiday music was spot-on.

Then we stopped making films for a while. So Jilly threw herself into her music. She teamed with another local musician to form the band Carnival of Faith. They released two fantastic folk-rock CDs on Immortal Bear Records. She then released her emotionally-charged solo album entitled “Porchsongs,” to critical acclaim. It was a collection of 12 acoustic love songs in which, as one reviewer pointed out, Jilly “wears her heart on her sleeve.”

I lost track of her when I was prepping LOST, and so I went with a different musician. But Jilly showed up at the premiere, and her only disappointment was that she wasn't on board for the project. I remedied that quickly, as I had another project in mind... our most challenging project. Another feature-length musical, METER GIRLS, set in its own time period (but hearkening back to the 60s), and naturally Jilly was one of the first to sign on. She stepped away from her folk roots to create original songs and incidental music for the film in the freewheeling fun lounge style of the 1960s.

A few more years passed, and then once again, Jilly was back at work with her guitar and collection of instruments and noisemakers to create the music for the DOOR MAT series. As always, her art created the mood, and perfectly defined the characters.

And we are still going strong. Jilly worked on a soundtrack for my completely silent school project KAFIEND, which set the perfect tone, even though she wrote the music more than a decade after the film. We reunited for the NUT CRACKER sequel N25,

and she once again knocked out a cool spooky holiday-themed score.

Jilly and Uncle Alice worked on a song for the credits entitled BLOOD & TINSEL. It

didn’t quite fit the tone of the film, but I loved it. So we made it into a music video.

And just last year she went back into the studio with Uncle A again, and they collaborated on the song YXY?. We made a music video for that too.

You can see both videos right here, and eventually you will be able to sample some

of Jilly’s music. Jilly Idle shows no signs of slowing down, and like a fine wine, just gets better with time. 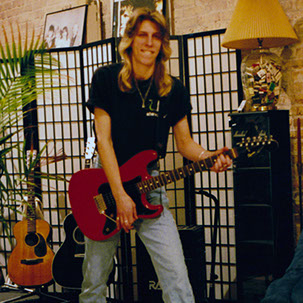 DOOR MAT: MOVIN’ ON IN