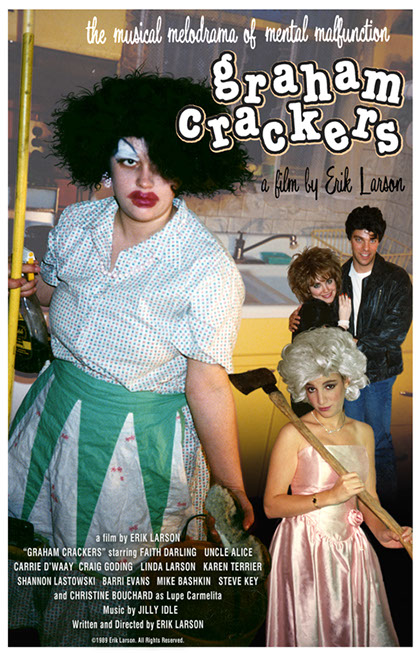 Oh, GRAHAM CRACKERS. This one broke all the rules, and was my most proudest production for years. I talked to Jilly Idle after our success with PROBLEM CHILD, and broached the possibility of her collaborating on original songs for a full-length musical movie. It feels like it didn’t take a whole lot of convincing, she was on board. Jill is a self taught musician; she loves to experiment and learn new things. This would be a huge challenge for both of us.

I set about creating the script, focusing on the Graham family, most of whom had names that coordinated with their surnames (Candy, Angie, Millie… and then Hector). The script went pretty fast, heroes, villains, double crossers, first love, makeovers, ugly duckling turned beautiful princess… and filled with songs. It was not long before we were ready to start filming.

Faith Darling was my star as Angie Graham, the misfit who blossoms into a beauty when she experiences love. She is the one trying to keep the family together at all costs. Uncle Alice was the matriarch Millie Graham, who loses her mind at the beginning of the film and kills her husband, then conveniently forgets about it. She had accused me in the past of making her look like a drag queen, so when I got the chance to do her makeup before we shot, I went to the extreme. Eyebrows drawn across her forehead, giant lips, and she played the whole thing up by deepening her voice. No wonder viewers were confused.

For Carrie D’Waay I wrote the bitch villain role of Candy, scheming, plotting, stopping at nothing. Her song was appropriately “I am sexy.” And she was! Barri Evans was cast as Millie’s sister Pinky, with towering pink cotton candy hair, vintage leopard print ensemble and drag queen makeup to match Millie. Oh, and she was extremely pregnant when we shot her first scene. Chris Bouchard played Lupe Carmelita, an homage to Carmen Miranda… the stranger who comes into the house and changes everyone’s life. But especially Millie’s. Craig was upgraded to the male lead and played Tab, Candy’s Elvis-ish boyfriend who Angie develops an instant attraction to. I made Craig adhere to the “everyone must wear wigs” rule, and I have to admit, at times his wig is just hilariously ridiculous. Karen Terrier played the androgynous detective Pat Franklin. Linda, finished with college, came back to our troupe playing Bingo Betsy the bible thumper. Our friend Shannon, who had always contributed behind the scenes, made her one on-camera appearance as Hector’s slavic mistress, and hit the right notes of high camp. I peppered as many friends, family and coworkers as possible throughout, and I think everyone had fun.

For all the moving parts, filming went really well. We shot nearly every weekend, prerecorded the songs at Jilly’s house and had everyone lip sync to them on camera. We had an old axe for the climax of the film… it was real, it was old, and when you would swing it, sometimes the heavy metal head would go flying off. Luckily nobody was hurt. I guess we lived on the edge. I had no idea how I was going to edit the thing, but I just went ahead and did it and it turned out the best of all my projects to date.

We held the premiere at the Roxy at the end of December, 1989. What a blast… it was jam packed… we ended up having to do two shows because we had sold so many tickets. And we returned to the Roxy many weekends the following year in command performances.

At one of the shows, a young couple came up to me and asked me how much I spent on the movie. As I may have mentioned, film was expensive, roughly $10-15 a minute with processing. So our 90-minute feature ended up being a couple of thousand dollars, with most of that going to the cost of film. When I told them about how much I had spent, they started saying things to me to the effect of “Well, if I had spent TWO THOUSAND DOLLARS, I would have made this kind of film, and I would have done this-and-that…” Which I considered to be the height of rudeness, to say the least. So I simply responded “But you DIDN’T, did you?” and bade them a good night. People can be such jerks.

Despite that one memorably unmemorable asshole couple, this remains one of my favorite movie experiences. Great cast, great music, great fun, and amazing shows with nearly unanimous acclaim from the people who were kind enough to come out and show their support.

Jilly Idle and her guitar, creating the infectious music

Craig Goding recording his song with Jilly Idle in her studio

An early wig test with Carrie D’Waay and Craig Goding. We ended up changing Carrie’s wig to a red shag. Craig’s stayed the same!

Carrie D’Waay and Craig Goding in their original wigs... I think we shot 2 scenes with them before changing Candy to a redhead

“There’s something wrong with mother...”

Another stranger arrives, and Angie thinks he is the answer to her prayers.

Aunt Pinky, with her towering cotton candy hair, arrives. Actress Barri Evans was extremely pregnant when we shot this scene

Fun family dinner time. We served the actors the most horrendous concoctions. The small bowl contains mud from the yard.

Millie’s favorite saying: “A clean floor is the sign of a healthy mind”

How great was my kitchen??!!

At the prom: Jilly Idle, Uncle Alice and Faith Darling

Angie gets a makeover... and an axe!

What did you axe me?

Behind the scenes with Barri Evans and her newborn son

Filming is done, wigs off!

After the premiere at The Roxy, December 1989. Craig Goding, me, Gina Cappuccino

Me at the premiere, December 1989. With my vintage tux and tails, and rented movie screen.

The premiere at The Roxy, December 1989. I was making a limp-wristed toast to the cast, who were seated onstage.

Karen Terrier, Christine Bouchard and Shannon Lastowski (Craig Goding in the back) in their 80s finery at the premiere at The Roxy, December 1989.

At the premiere at The Roxy, December 1989. L-R Jilly Idle, me, Craig Goding (back), Linda and Christine Bouchard