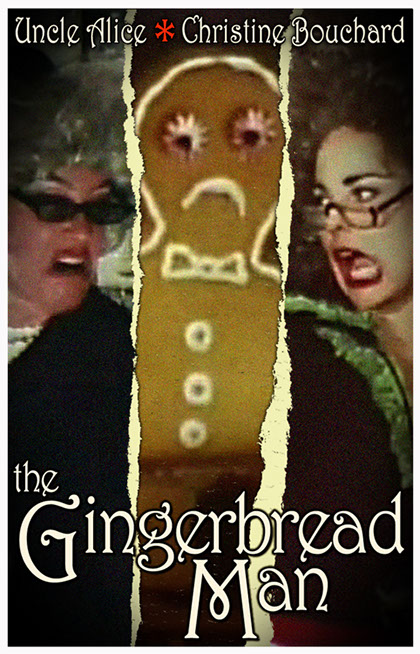 My intention was to follow up METER GIRLS with a holiday horror comedy, about a pair of crotchety middle aged sisters who inadvertently unleash a monster-sized gingerbread man upon their city. The relationship was kind of based upon my Grandma Bernadette and Aunt Mary, who were sisters who lived with one another for decades. And they got on each others’ nerves something terrible. So they would call each other sweet, affectionate nicknames when face to face, and then would turn sour as soon as one left the room. It made for fun visits to them (not really, it was terribly uncomfortable).

The two sisters were played by Uncle Alice and Chris Bouchard… we shot some initial scenes with them and they were both absolutely fantastic. My favorite improvised take on a scripted line from Bouchard “Every fuckin’ idiot knows you need molasses to make gingerbread… you fuckin’ idiot.”

We had a gingerbread man puppet made of foam, and a script with a precocious child, an overbearing mother (to be played by stevie) and a silly nun (who would be Gabby Sanalitro). When our test footage came back, I realized my super-8 camera was malfunctioning and garbling sound. I had one place I would take my equipment to for fixing, but the results were hit or miss.

We did show some of the footage we had shot in 2001 as part of our “Framed” show at High Risk Gallery.

Christine Bouchard in my old kitchen

I loved the costumes we had for this... I still have them in a separate box, just in case we ever get to make the film

The fright wigs make me so happy