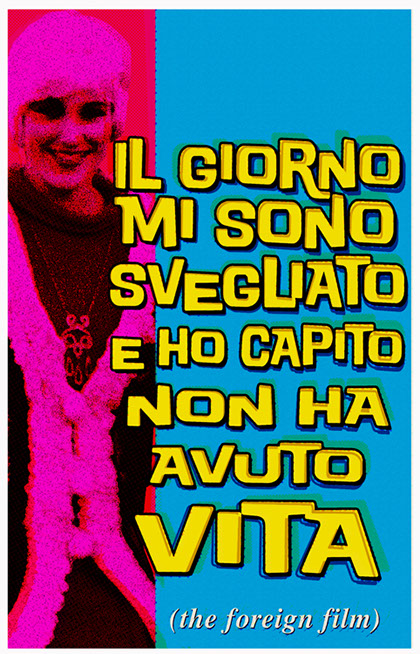 Another one from the grab bag I call my mind… I think the true inspiration was that there was a defect in my Super-8 movie camera that garbled the sound (as happened with NUT CRACKER), so why not shoot a film and replace the dialogue. I had the idea to shoot a film with a loose storyline, with dialogue spoken in gibberish… that would then be dubbed by other people in my troupe of players to give the impression of a poorly dubbed foreign film. Even the people in this do not seem to recall working on it, but I assure you it happened!! My working title was “The Day I woke Up and Realized I Had No Life” or something like that. But we just called it THE FOREIGN FILM for short.

The story was about a girl (my coworker Sue) who has no sense of self worth with the men in her life, and Faith Darling as her roommate who attempts to be the voice of reason. The girl winds up with a bowl of Mac and Cheese dumped on her head, which was very vivid in Jilly Idle’s yellow kitchen. Steve Key was the guy who did not want her attentions, and Carrie D’Waay was the older divorcee who did her best to seduce him away.

Steve got uncomfortable doing a scene where he was to be tied up… and I think other outside commitments kinda dwindled the interest of everyone involved eventually.

I have to say, the look and costumes were really fun… very mod, very colorful. These costumes (and a lot of others I had collected over the years) were later “borrowed” by a friend of a friend for a photo shoot, and then she refused to give them back and my friend refused to get involved. So not borrowed, stolen.

Oh, one bit of trivia for anyone familiar with my films... we used the photo of Faith Darling on the set (eating macaroni & cheese) for 1998's METER GIRLS when Naomi refers to her daughter Trixie. Uncle Alice still calls Faith “Trixie” to this day!

Click on thumbnails below to start slideshow of images from the film!

Carrie D’Waay, Faith Darling and Sue Sherman shoot a scene on Ravenswood, which still had some sections that were cobblestone... giving that European feel

This is the photo we used in METER GIRLS for Trixie... I love these costumes. And Faith perfect the whole double-wig thing that we also ended up doing in METER GIRLS!

When you push someone too far, you end up wearing dinner

Sue Sherman breaks character... because we really did dump mac and cheese over her head.