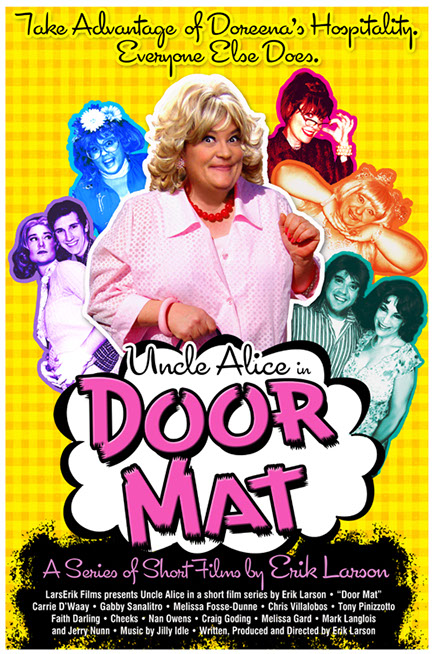 Doreena Matune likes to think of herself as the nicest lady in town. But some people have another name for her. DOOR MAT is a series of three short films, a true homecoming. We gathered together to create a new project for the first time in over a decade, reuniting many so of my superstars, and adding some shiny new faces to the mix. I think these films stand as examples of some of the best work I have ever done.

In MOVIN’ ON IN, Doreena moves to a new house following the death of her good-for-nothing husband. She meets new neighbors Maggie Magnolia and her model-slash-actress daughter Starlette. The new neighbors take advantage of Doreena’s good nature and move right in on her.

In CRAZY LOVE, Doreena's son Hank comes to visit with a surprise in tow -- his blushing bride Suzy. Turns out the new daughter-in-law is extremely needy, and after some comic hijinks the Matune family realizes just how close they all are.

In IT’S A BOY!, Doreena receives a set of visitors -- her favorite nephew Buckley and his girl. The kids are in trouble, and in hiding from Buckley's crazed mother Joreeta. And it seems there is a little secret that the girl is hiding...

The films were inspired by our move from Chicago to California, as we often open our house to visitors from back home, friends and family alike. We just think we are nice, but some have cruelly called us door mats. I wrote these films in answer to that accusation.

The three films in the DOOR MAT series were shot over the course of 6 days, each about 30 minutes long... so the equivalent of a 90-minute feature in less than a week. They were the first projects we did in HD widescreen video. They premiered in Los Angeles at Quentin Tarantino’s New Beverly Cinema in 2011 to a full house. They made their Chicago debut in 2013 at Chicago Filmmakers with two sold-out shows.

Chris Villalobos and Cheeks as young lovers Buckley and Xoie

Uncle Alice as Doreena in DOOR MAT: MOVIN’ ON IN

Uncle Alice as Doreena serving up some... home cooking.