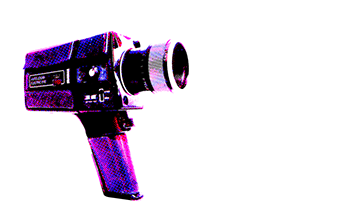 I’m a graphic designer and hands-on art director who has established a name for himself as an acclaimed underground filmmaker since my teen years.

The videos featured on this page highlight my fun and quirky personal style, and feature a variety of projects from stints at Game Show Network, ABC (both in Chicago and Los Angeles), Fox, My Network TV and Weigel Broadcasting as well as my independent film and video projects.

A quick showcase of the creativity and design of me --  filmmaker/designer/art director Erik Larson, highlighting spots from my work with Game Show Network, ABC7 Los Angeles, Fox 11 Los Angeles, Good Day LA, ABC7 Chicago, Weigel Broadcasting and some of my independent productions.

I did some motion graphics/animations... I worked on some  promo shoots... I spearheaded photo shoots of celebrities... and made a bunch of films and music videos. All of which are represented in this two and a half minute clip. Enoy!

This video collaboration with longtime friends and indie film partners Jilly Idle and Uncle Alice was meant to serve as an anthem to being exactly who you are, and a tribute to being true to the person you were meant to be.

Shot on location in Chicago and Los Angeles.

Opens for 3 different episodes for the ABC7 Witness series of in-depth specials. More serious in tone, to complement the mood of the programs.

The opening credits for the first in a series of three independent films by director/writer Erik Larson. Conceptualized and executed by Erik Larson, including all photos, illustrations and animation.