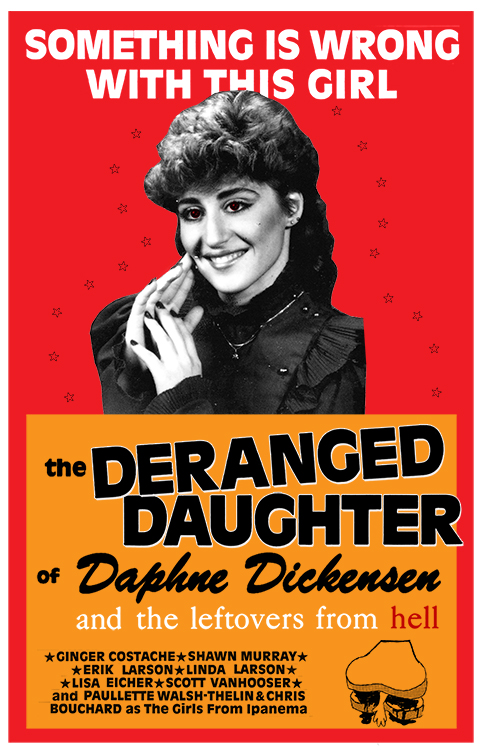 The one that started it all. The extraneously titled THE DERANGED DAUGHTER OF DAPHNE DICKENSEN AND THE LEFTOVERS FROM HELL was the first “real” film I made. I mean, I had made films before… I started off with home movies of friends and family (and the occasional puppet), worked my way up to coming up with plots (loose as they might be), writing scripts, incorporating props, hair and makeup, filming and putting them all into some semblance of a short film. I recruited the neighborhood kids and my little brother Scott. We made short stories of superheros and monsters, recreated moments from classic films and Star Wars movies. They were goofy. They were fun.

I had a couple of film classes in high school, and made some shorts there. In junior year, I moved from the suburbs back to Chicago and found myself in a photography class taught by one of my sister Linda’s former teachers. When Mrs. Meyerson found out who I was related to, she urged me to join the art class. I can’t claim to have a fraction of the talent my sister has, but I felt I was in no position to say no, so I agreed. By my senior year, I was in a double period art class. Mrs. Meyerson offered an intriguing challenge… that I could come up with a project incorporating my love of film and art. I decided to do a hand drawn cel animated cartoon entitled SWAN SONG. It had a swan that turned into a girl, who found a unicorn (it was the early 80s) and followed it through magic glowing doors all over the city. This makes it sound much better than it actually was. The story was about a minute and a half, the credits probably 4 minutes. Because I got to lead the entire class and have them help me do backgrounds and paint all of the cels. It took a good part of the year, and as graduation week approached we set up a projector in the school darkroom and invited pretty much the entire school to see it, 5 people at a time. A rousing success.

Anyway, my plan had been to go to Columbia College and study film. We were a very low-income family but my dad was a disabled WW2 vet, and my college would have been largely subsidized. Except the Reagan budget cuts went into effect and money for schooling was suddenly gone. SO college was not going to happen for me. I looked into what it would cost to take an Intro to Film class at Columbia, and it was going to be something like $1500-$2000 for the one class. An amount that was completely unrealistic on my $4-an-hour warehouse job salary. And I thought to myself… why not just take whatever money I can and make a film? THAT in itself would be an education. So that is exactly what I did. The result was DERANGED DAUGHTER.

I didn’t really have a plot or anything, but I knew I needed Star Power if I was going to make this work. And then, as if someone was listening to my heart’s desires, I ran into one of the kids from my art class who had IT. And everything started coming together.

Her name was Ginger (that was actually her “American” name… her family had emigrated from Romania when she was younger). She was very gregarious, very intriguing. In art class, she would hang out with another girl named Iris… many days, the two of them would wait until role call had been taken in the class and then disappear. They were naughty, but kinda innocent naughty. Clearly she was star material. I ran into Ginger on a bus one night. I got off the bus to talk to her, she turned around thinking I was some attacker. We chatted for a while and I offered her the lead in my upcoming film. She asked what it was about and I rattled off some random things off the to of my head. I guess it worked… she was in.

Next I went about calling in my other big guns… my sister Linda, my brother Scott, and a friend named Shawn who had big time magnetism. She was a couple of years older than I was, so naturally I offered her the role of the mother in the film. That didn’t go over so well, but she eventually got over the fact that she was 21 and playing the mother of a teenager.

The plot, such as it was, concerned a young girl named Nikki Dickensen... her mother always sent leftovers for her lunch, which Nikki hated. So one day, after finding her mother Daphne canoodling with a young punk who was actually HER boyfriend (played by me), she killed her mother in a rage. But Daphne's blood splashed onto the sandwich of leftover tongue and brought it to life. Nikki then spent the next 20 minutes on the run from the crawling, man-eating sandwich.

Filming took place for nearly a year... I would buy Super-8 sound film as I could afford it, and we would shoot whenever anybody was available. And being that this was my film class, the film didn't always come out so good. I mean... I guess I should have studied up on lighting a little, because many scenes are extremely murky. Something else I never anticipated was that a teenage girl in 1983 would change her hair constantly... so every time Ginger showed up to film, her hair was a different length and color. And that is why I make everybody wear wigs!

Midway through the neverending shoot, I met a couple of gals who also had star quality... Paullette Walsh and Christine Bouchard. I worked with them in the Art Department at Sound Video Unlimited. They were punk/new wave chicks... spiky hair, wild makeup, dressed in vintage fashions. I could not deny them their moment in the spotlight, even though I didn't actually have anything in the script for them. SO one night I just went to Chris' apartment with my camera, they put on some 60s cocktail dresses and danced to "Girl from Ipanema." It doesn't really relate to the rest of the film, but what the heck. It was just fun. My mom said it was her favorite film moment of anything I ever did.

I don't remember what the original ending was supposed to be; maybe I didn't have one in mind. But I decided to end the film with Nikki coming home to find her mother-lovin' boyfriend at her house looking for some action. Nikki chops his head off with a meat cleaver, foams at the mouth and then falls down the basement stairs to her death. I think we forgot all about the monster sandwich. Which incidentally was a REAL tongue sandwich that I just kept freezing, thawing and refreezing for a year. Oh, and we had moved since we started shooting, so the house at the end didn't match the house at the beginning. I guess I shoulda studied continuity too. I mean, this was just like school when you think about it. I learned so much.

I edited this monsterpiece together. I didn't know that with sound striped Super-8 film, the sound is actually 24 frames ahead of the picture. SO when I cut it together, a lot of dialogue was clipped.  Oh well, live and learn.

I set a premiere date in October of 1984. We showed it to maybe 10 people in the basement of our house. I made tickets and everything. I was hooked... this was what I wanted to do. It was goofy. It was fun. That part never changed from the first films I made. In fact... that part has NEVER changed in the 35+ years I have been doing this.

The murder. Gina Cappuccino and Uncle Alice in DERANGED DAUGHTER

Her 12th hairstyle in as many months. Gina Cappuccino in DERANGED DAUGHTER

The original ticket art for the premiere of DERANGED DAUGHTER. Please note it says January 5... this was actually a second screening, by popular demand.